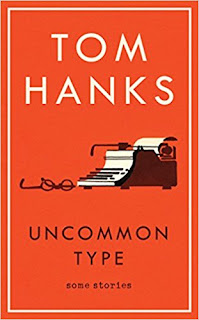 Over the last few years India has seen book launches and literary festivals across the country bombarded with big names from Bollywood. Often these events are described as ‘star-studded affairs’. Now, increasingly, from being chief guests cutting ribbons to release books, actors are becoming active participants as writers or protagonists in their memoirs/autobiographies/biographies. Twinkle Khanna, Sunny Leone, Karan Johar and Rishi Kapoor are some recent examples. Out of these both Khanna and Leone have successfully tried their hand at fiction.

Skeptics may wonder how many of them can really write, but better than usual sales figures usually make up for other inadequacies. Some, of course, do succeed in surprising their readers with genuine talent.

Quite natural then that Hollywood stars should be next. Well-known actor and Oscar winner, Tom Hanks, has just published his collection of seventeen short stories, Uncommon Type, about 400 ambitious pages long.

The obvious question that comes to mind is: Can he write?

Answer: Sure he can. Better than most people would like to believe. He may not exactly be a literary giant in the making, but he can certainly tell a story and tell it well. A distinct voice – even if the tone is informal for the most part, a racy style and believable characters are the stronghold of his literary universe. Sometimes the stories are interconnected, the characters repeated. The very first story, ‘Three Exhausting Weeks’ has its characters recur in ‘Alan Bean Plus Four’ and ‘Steve Wong is Perfect’.  They are also perhaps some of his best stories. In fact it is quite easy to imagine the author playing the male protagonist in a TV/movie adaptation of most of them.

Hanks also experiments with form. The character, Hank Fiset, for instance, is a columnist at a newspaper struggling to survive. He is also, perhaps, the actor-author’s alter ego whose own stories occur in column inches more than once. Yet another, ‘Stay With Us’, reads like a play. Hanks draws a great deal from his experiences as an actor. ‘A Juket is the City of Life’ is a fine sample.

To Hanks’s American readers, especially those acquainted with his movies, a lot of it may sound familiar or even clichéd, but it still works pretty well for the majority of Indian readers.