A Suitable Book: Vikram Seth in Conversation with Somnath Batabyal at the Jaipur Literature Festival

(Published in Pravasi Bharatiya, IANS, February 2011)
I-Witness: A Peek into the Future 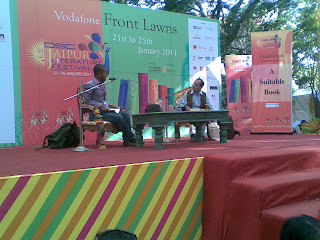 For the fans of Vikram Seth, the Jaipur tryst with the author was a special one indeed. The very name of the session stemmed from the title of his extremely popular and successful novel, A Suitable Boy.
Not only did Seth speak of his novel, and its Hindi avatar, Koi Achcha sa Ladka (Seth mentioned he decidedly hadn’t been in favour of Ek Suyogya Var – the title suggested earlier), he also gripped the audience with his thoughts on the much awaited sequel to the original English version, which is going to be called A Suitable Girl – of course.
At no point did Seth seem to shy away from revealing his thoughts about the sequel he is yet to begin.


‘I haven’t started writing it yet,’ he said.
When he should really be focusing on writing the sequel, he said, he has been preoccupied with other things instead: sculpture for one. He went on to describe sculpture and the properties of glass for a few deliberate moments to an amused audience, before cleverly reverting to the discussion at hand.
‘As you can see, I easily get distracted,’ he grinned, while his equally clever and entertaining interviewer, Somnath Batabyal, sat back and smiled with the audience before jumping back again with the next question at the opportune moment.
The audience wanted to know how Seth felt about Lata Mehra – the protagonist of the earlier novel: whether she had made the right choice, and whether she was happy.
‘I wish I knew,’ he replied. ‘I really wish I did, but I don’t. I hope she is.’
Well, there’s a good author all right – letting his characters live their own lives in peace!
So what’s A Suitable Girl going to be about?
Erm … it will be about our dear Lata Mehra’s grandson seeking a girl. One could make out Seth was thinking aloud as he went on with his almost-soliloquy, allowing the audience a peep into his thoughts. For those few moments the thoughts were out there for everybody to enjoy – cinemascope.
‘Lata would now probably be eighty,’ he said. ‘About sixty years would have elapsed since then. And I might set the story in modern times instead of immediately after Partition. The research would also have to be different. I might travel and visit places.’
The parent novel had been set in post-Partition India and, as everybody is probably aware, the research that went into the book was exhaustive!
Talking about the length of the book, he said with another smile, ‘Well … it could be a slim book, or it may turn out to be another monstrous, big book.’
A Suitable Boy had indeed been one such, running into1488 pages in paperback, released in 1993. A manuscript of that length would have been enough to unsettle the best of publishers! Of course, it did go on to become brilliantly successful in spite of its thousand characters and their extended families or friends, simply because Seth knew his craft so well!
He read extracts from his poetry, and the complete poem, ‘The Frog and the Nightingale’ on special request from a university student, who apparently had the poem in the syllabus. 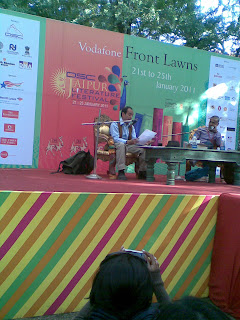 In the middle of the session Seth switched places with Batabyal upon a whim, because he said he couldn’t see the audience on the other side properly. (Hence the confusing photographs!)
A young woman put a question to him about what to do about a writer’s block when it comes to poetry.


Seth’s reply: ‘The point is to write a poem you can’t not write. There are some things that can’t be written. Life is not all about writing. It is better to store up experiences and return to them when you have found clarity of expression.’
To my own question about whether he believes in creative writing courses, he said, ‘I wouldn’t cut off the hand that has fed me.’ Translated, it means that he believes writing skills can be honed if not quite ‘acquired’, and he did get some guidance for a brief period at Columbia himself, which he found useful.
A Suitable Girl is scheduled for release in 2013, and the world waits for Seth’s magic to strike once again. Lots of mays and mights and ifs and buts at the moment – but it’s sure to be a feast!
Posted by Divya Dubey at 11:15 AM

Email ThisBlogThis!Share to TwitterShare to FacebookShare to Pinterest
Labels: Article